Cellular metabolic energy drives every action within the human body.

Cellular metabolic energy drives every action within the human body.

An inevitable consequence (if not a precursor) of aging is a slow, insidious decline in cellular energy levels. The outward effects often present as a sense of overall fatigue, depression, sexual dysfunction and a variety of diseases of aging. The internal effect of a cellular energy deficit is a greater vulnerability to a host of degenerative diseases.

A chronic decrease in cellular metabolic energy is an underlying cause of many seemingly unrelated, age-related diseases. As humans grow older, systemic energy depravation can inflict devastating degenerative effects throughout the body. This fact is often overlooked by the medical establishment, yet persuasive scientific evidence exists that correcting chronic cellular energy production may enable many of the infirmities of aging to be prevented or reversed.

The prime reason cells lose their energy-producing ability is that the powerhouses of the cells - the mitochondria - become dysfunctional due to nutritional deficiencies. Research has shown that carnitine, ribose, coenzyme Q10, acetyl l-carnitine and alpha-lipoic acid are critical to maintaining optimal mitochondrial function and supporting high energy production.

Dangers of cellular energy depravation should not be ignored. Every organ - from the heart to the kidneys to the skin; every process in the body - from walking to breathing to immune function to vision - is driven by energy produced in the cell's mitochondria. Proven ways exist to increase the effectiveness of cellular respiration and reduce the effects of aging. By following specific diet and supplement protocols, energy production can be restored and maintained.

Since the mitochondria provide energy to every cell in the body, it is not surprising that published research has implicated optimum mitochondrial function in

Four recent books and one major paper summarize recent research and discuss the benefits of supplementing with the Metabolic Optimizer™ protocol:

4. Low micronutrient intake may accelerate the degenerative diseases of aging through allocation of scarce micronutrients by triage; Bruce Ames, Ph.D. Proceedings of the National Academy of Sciences U S A. 2006 Nov 21;103(47):17589-94.

Mitochondria are small, oval shaped organelles surrounded by two highly specialized membranes that convert energy from fats derived from food. Mitochondria are the sites of aerobic respiration, and are the major energy production center in cells.

The metabolic ATP Krebs energy cycle provides critical energy to every function in the body from beating of the heart to liver, kidney, brain and immune functions. Research has shown that increasing the energy available to the cells helps the body operate at its optimum level.

Dr. Bruce Ames presented his "triage theory" of aging in November 2006 that explains past observations of age-associated mitochondrial decay. This theory says that evolution has equipped the body with a triage mechanism: When deficient, micronutrients are reserved for short-term health and reproduction - disabling DNA repair and longevity.6

Dr. Ames research on DNA aging in old rats and its reversal with Mitochondrial Optimizer™ supplements - acetyl l-carnitine and alpha-lipoic acid, shows that mitochondria in old rats can be made to look more like that in young rats. Their brains got better and they were more energetic.13

Based on the following observations - many kinds of nutrient deficiencies cause long-term DNA damage to human cells and many studies implicate long-term deficiencies as a cause of cancer and other conditions - he asked why would nature do it this way? The answer is that in order for someone to live long-term, they have to survive the deficiencies and episodic shortages in the short-term. Whenever there is a trade-off between short-term and long-term, short-term gets favored.

Dr. Ames observes that following the recommended daily allowance (RDA) for vitamins is inadequate for long-term health. He reports that the RDA was set by looking at only short-term nutrient needs. Someone might seem in perfect health, however their DNA is being damaged because of inadequate long-term nutrient intake.

The heart utilizes more energy than any other muscle in the body, thus the concentration of mitochondria within heart cells is higher than any other organ. The heart is the most susceptible organ to free-radical oxidative stress, environmental toxicities, heavy metal poisoning and premature aging. Yet it's also highly responsive to the benefits of targeted nutritional supplements.1

The heart needs a large amount of oxygenated blood flow to continually meet its huge energy demands. The synergistic combination of the Metabolic Optimizer™ protocol - coenzyme Q10, L-carnitine, and D-ribose - maximizes the amount of oxygen that the heart can extract from blood by accelerating the rate at which cells convert nutrients to energy.

Essential to youthful, healthy skin are cells called fibroblasts. Fibroblasts produce the essential proteins known as collagen and elastin, which provide structural support and elasticity to the skin. In aging adults, however, fibroblast cells demonstrate dramatic mitochondrial dysfunction.9 As a result, fibroblasts are less able to produce the energy required to carry out their essential skin-supporting functions. Scientists believe that this energy deficit of essential skin cells contributes to the visible signs of skin aging.10,11

Mitochondria have been connected with cancer since the 1930s, when researchers first noticed that these organelles act dysfunctional when cancer is present, resulting in the unique aerobic glycolysis metabolic profile of cancer. Researchers at the University of Alberta have shown that restoring mitochondrial function decreases cancer tumor growth.16

Studies have demonstrated that migraine patients have impaired mitochondrial function resulting in a reduction in energy production in brain tissue.17 Research has also shown an increased risk of cardiovascular disease in men and women who suffered from migraines.18

Nutrients essential for mitochondrial energy production include magnesium, CoQ10, Carnitine, and Ribose. Controlled trials have demonstrated that supplementing with either magnesium or Coenzyme Q10 can reduce the attack rate in migraine sufferers,17 just as they benefit CVD patients.1

The principle function of L-Carnitine is to facilitate the transport of long-chain fatty acids across the inner mitochondrial membrane to begin the cellular metabolic (energy production) process. L-Carnitine is the only carrier that can perform this function, thus its abundant presence is critical to life.

Ribose is a simple 5-carbon sugar that occurs naturally throughout the body. It is made from glucose, but in stressed cells, glucose is preferentially metabolized for energy turnover rather than ribose synthesis. Supplementation with Metabolic Optimizer™ - Ribose builds ATP in heart and muscle, providing healthy levels of cardiac energy needed to maintain normal heart function. Ribose does not add to glycemic load.

When cells are depleted of oxygen, large amounts of ATP, the body's primary energy-carrying molecule, can be depleted in heart and skeletal muscles. D-Ribose is used by the body to synthesize nucleotides, ATP, nucleic acids, and glycogen and thus replenish energy in the cells.

Acetyl L-Carnitine (ALCAR) is an amino acid-like compound which plays a key role in the transport of fatty acids from inside the cell through the mitochondrial membrane to the mitochondria for beta-oxidation. This is a crucial step for energy production. ALCAR controls the metabolism of sugars, lipids and amino acids, thus playing a pivotal role in cellular energy and turn over of cell membranes and proteins.

Alpha-Lipoic Acid limits and reduces the excess free radicals, which cause free radical damage initiated as a byproduct of energy production in the mitochondria. ALA acts similarly to the function of a catalytic converter on a car, minimizing the long-term damage to the cellular environment. 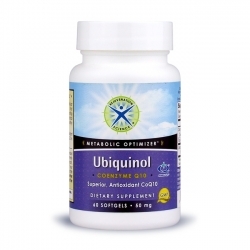